Vienna, 1914. Lucius is a twenty-two-year-old medical student when World War I explodes across Europe. Enraptured by romantic tales of battlefield surgery, he enlists, expecting a position at a well-organized field hospital. But when he arrives, at a commandeered church tucked away high in a remote valley of the Carpathian Mountains, he finds a freezing outpost ravaged by typhus. The other doctors have fled, and only a single, mysterious nurse named Sister Margarete remains.
But Lucius has never lifted a surgeon's scalpel. And as the war rages across the winter landscape, he finds himself falling in love with the woman from whom he must learn a brutal, makeshift medicine. Then one day, an unconscious soldier is brought in from the snow, his uniform stuffed with strange drawings. He seems beyond rescue, until Lucius makes a fateful decision that will change the lives of doctor, patient, and nurse forever.

On May 1, 1915, with WWI entering its tenth month, a luxury ocean liner as richly appointed as an English country house sailed out of New York, bound for Liverpool, carrying a record number of children and infants. The passengers were surprisingly at ease, even though Germany had declared the seas around Britain to be a war zone. For months, German U-boats had brought terror to the North Atlantic. But the Lusitania was one of the era’s great transatlantic “Greyhounds”—the fastest liner then in service—and her captain, William Thomas Turner, placed tremendous faith in the gentlemanly strictures of warfare that for a century had kept civilian ships safe from attack.

Germany, however, was determined to change the rules of the game, and Walther Schwieger, the captain of Unterseeboot-20, was happy to oblige. Meanwhile, an ultra-secret British intelligence unit tracked Schwieger’s U-boat, but told no one. As U-20 and the Lusitania made their way toward Liverpool, an array of forces both grand and achingly small—hubris, a chance fog, a closely guarded secret, and more—all converged to produce one of the great disasters of history.

The “clever and wonderfully chilling” (Fiona Barton) suspense novel from the award-winning author of The Haunting of Maddy Clare...

Born to survivalists in the mountains of Idaho, Tara Westover was 17 the first time she set foot in a classroom. Her family was so isolated from mainstream society that there was no one to ensure the children received an education and no one to intervene when one of Tara's older brothers became violent. When another brother got himself into college, Tara decided to try a new kind of life. Her quest for knowledge transformed her, taking her over oceans and across continents, to Harvard and to Cambridge University. Only then would she wonder if she'd traveled too far, if there was still a way home.

Constantine the Emperor
By David Potter
Monday, May 11, 2020 at 10:00am
​No Roman emperor had a greater impact on the modern world than did Constantine. The reason is not simply that he converted to Christianity, but that he did so in a way that brought his subjects along after him. Indeed, this major new biography argues that Constantine's conversion is but one feature of a unique administrative style that enabled him to take control of an empire beset by internal rebellions and external threats by Persians and Goths. The vast record of Constantine's administration reveals a government careful in its exercise of power but capable of ruthless, even savage, actions. Constantine executed (or drove to suicide) his father-in-law, two brothers-in-law, his eldest son, and his once beloved wife. An unparalleled general throughout his life, planning a major assault on the Sassanian Empire in Persia even on his deathbed. Alongside the visionary who believed that his success came from the direct intervention of his God resided an aggressive warrior, a sometimes cruel partner, and an immensely shrewd ruler. These characteristics combined together in a long and remarkable career, which restored the Roman Empire to its former glory.

For years, rumors of the "Marsh Girl" have haunted Barkley Cove, a quiet town on the North Carolina coast. So in late 1969, when handsome Chase Andrews is found dead, the locals immediately suspect Kya Clark, the so-called Marsh Girl. But Kya is not what they say. Sensitive and intelligent, she has survived for years alone in the marsh that she calls home, finding friends in the gulls and lessons in the sand. Then the time comes when she yearns to be touched and loved. When two young men from town become intrigued by her wild beauty, Kya opens herself to a new life - until the unthinkable happens. der.

In the 1920s the richest people per capita in the world were members of the Osage Indian nation in Oklahoma. After oil was discovered beneath their land, they rode in chauffeured automobiles, built mansions, and sent their children to study in Europe.
Then, one by one, the Osage began to be killed off. The family of an Osage woman, Mollie Burkhart, became a prime target. Her relatives were shot and poisoned. And it was just the beginning, as more and more members of the tribe began to die under mysterious circumstances.
In this last remnant of the Wild West - where oilmen like J. P. Getty made their fortunes and where desperadoes like Al Spencer, the "Phantom Terror", roamed - many of those who dared to investigate the killings were themselves murdered. As the death toll climbed to more than 24, the FBI took up the case. It was one of the organization's first major homicide investigations, and the bureau badly bungled the case. In desperation the young director, J. Edgar Hoover, turned to a former Texas Ranger named Tom White to unravel the mystery. White put together an undercover team, including one of the only American Indian agents in the bureau. The agents infiltrated the region, struggling to adopt the latest techniques of detection. Together with the Osage they began to expose one of the most chilling conspiracies in American history.

On June 5, 1944, as dawn rises over a small town on the Normandy coast of France, Emmanuelle is making the bread that has sustained her fellow villagers in the dark days since the Germans invaded her country.
Only 22, Emma learned to bake at the side of a master, Ezra Kuchen, the village baker since before she was born. Apprenticed to Ezra at 13, Emma watched with shame and anger as her kind mentor was forced to wear the six-pointed yellow star on his clothing. She was likewise powerless to help when they pulled Ezra from his shop at gunpoint, the first of many villagers stolen away and never seen again.
In the years that her sleepy coastal village has suffered under the enemy, Emma has silently, stealthily fought back. Each day she receives an extra ration of flour to bake a dozen baguettes for the occupying troops. And each day she mixes that precious flour with ground straw to create enough dough for two extra loaves - contraband bread she shares with the hungry villagers. Under the cold, watchful eyes of armed soldiers, she builds a clandestine network of barter and trade that she and the villagers use to thwart their occupiers.
But her gift to the village is more than these few crusty loaves. Emma gives the people a taste of hope - the faith that one day the Allies will arrive to save them.

Born to survivalists in the mountains of Idaho, Tara Westover was seventeen the first time she set foot in a classroom. Her family was so isolated from mainstream society that there was no one to ensure the children received an education, and no one to intervene when one of Tara’s older brothers became violent. When another brother got himself into college, Tara decided to try a new kind of life. Her quest for knowledge transformed her, taking her over oceans and across continents, to Harvard and to Cambridge University. Only then would she wonder if she’d traveled too far, if there was still a way home.

Fifteen-year-old Lina is a Lithuanian girl living an ordinary life -- until Soviet officers invade her home and tear her family apart. Separated from her father and forced onto a crowded train, Lina, her mother, and her young brother make their way to a Siberian work camp, where they are forced to fight for their lives. Lina finds solace in her art, documenting these events by drawing. Risking everything, she imbeds clues in her drawings of their location and secretly passes them along, hoping her drawings will make their way to her father's prison camp. But will strength, love, and hope be enough for Lina and her family to survive?

Profoundly moving and gracefully told, Pachinko follows one Korean family through the generations, beginning in early 1900s Korea with Sunja, the prized daughter of a poor yet proud family, whose unplanned pregnancy threatens to shame them. Betrayed by her wealthy lover, Sunja finds unexpected salvation when a young tubercular minister offers to marry her and bring her to Japan to start a new life.
So begins a sweeping saga of exceptional people in exile from a homeland they never knew and caught in the indifferent arc of history. In Japan, Sunja's family members endure harsh discrimination, catastrophes, and poverty, yet they also encounter great joy as they pursue their passions and rise to meet the challenges this new home presents. Through desperate struggles and hard-won triumphs, they are bound together by deep roots as their family faces enduring questions of faith, family, and identity. 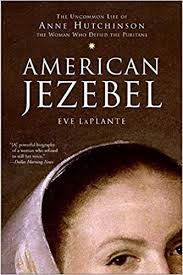 American Jezebel: The Uncommon Life of Anne Hutchinson, the Woman who Defied the Puritans
By Eve LaPlante
Monday, December 14th, 2020 at 10:00am

In 1637, Anne Hutchinson, a forty-six-year-old midwife who was pregnant with her sixteenth child, stood before forty male judges of the Massachusetts General Court, charged with heresy and sedition. In a time when women could not vote, hold public office, or teach outside the home, the charismatic Hutchinson wielded remarkable political power. Her unconventional ideas had attracted a following of prominent citizens eager for social reform. Hutchinson defended herself brilliantly, but the judges, faced with a perceived threat to public order, banished her for behaving in a manner "not comely for [her] sex."